Interesting article: by the way Ghutah is apparently the location of the Second Coming of Christ! 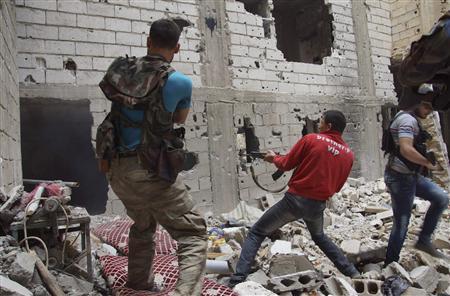 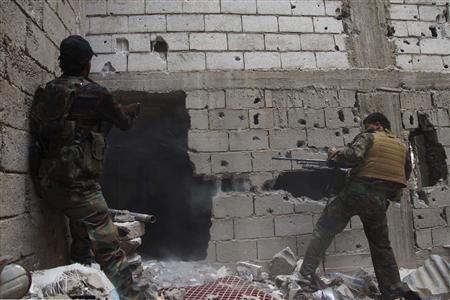 Free Syrian Army fighters return fire after what they say was during clashes with forces loyal to President Bashar al-Assad in Deir al-Zor May 13, 2013.

(Reuters) – Syrian rebels including the al Qaeda-linked Nusra Front have counter-attacked east of Damascus to retake a town that served as a conduit for arms from Jordan into the capital before it was seized by government forces last month, rebel sources said.

The rebels’ struggle to end four decades of Assad family rule has been complicated in part by internal divisions along ideological and political lines, as well as a shortage of heavy weaponry that could decisively turn the tide of conflict.

But in a rare move, brigades operating in Ghouta, a largely agricultural region on the eastern outskirts of Damascus, have united under one command to wrest back the town of Otaiba, two miles northeast of Damascus international airport.

“This is a huge target no brigade can deliver on its own, even al-Nusra cannot do it alone, so we all agreed to unite to retake it,” said a commander whose brigade is one of the 23 taking part in the battle.

“With God’s will this will be a decisive battle in rural Damascus that will stop the advance of the regime army and reopen the supply route.”

Brigades from the Western-backed rebel General Command and Islamist units joined forces over the weekend and pledged to share weapons and fighters. They took as their flag a white banner with the Muslim declaration of faith: “There is no god but God; Mohammad is God’s prophet”.

“We are fighting for the same goal and that is to topple Assad – so why shouldn’t we unite?” said a commander from an Islamist brigade involved in the battle.

Government forces have regained the initiative in the past few weeks, pushing rebels from areas close to central Damascus.

Rebels said they wanted to take advantage of the unusual unity among brigades in the latest campaign – named Al Furqaan after a chapter in the Koran – to press on to Damascus airport.

The bloc of brigades was agreed only for the current battle, the rebels said, but it was driven by a heavy setback last month when their feuding and failure to reinforce local fighters allowed government forces to advance.

“How could they allow the loss of their supply line? How could they all just sit there and watch the regime throttling their lungs?” said a rebel from Otaiba. “Now they are paying the price – some shipments that were delivered earlier are stuck and need a path so they have to open the route.”

In addition to al-Nusra Front, Islamic groups like the powerful Liwaa al-Islam, Liwaa Martyrs of Douma and Ossoud al-Allah are also in the union under the command of Abu Salah Taha, head of the Martyrs of Douma.

The agreement signed by the brigades commits them not to pull out of battle or hold back their weapons, as some rebel groups have done in other provinces, and those who break the code are to be held to account.

“So far everyone is committed and everybody is using their weapons. They are all present on the front, which is 8 kilometers (5 miles) long,” said a fighter via Skype.

The Islamist commander said hopes were high in this offensive and that if it succeeded it would pave the way for rebels to work together in a national body.

“This is like a rehearsal for a wider cooperation across the country. If this is successful then all of us will consider forming a national army.”

This site uses Akismet to reduce spam. Learn how your comment data is processed.

I'm a twenty something Muslim trying to make my way to his Lord in this strange planet we call home. View all posts by abiriax